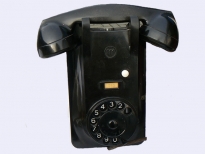 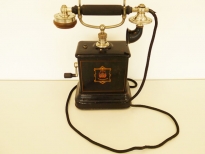 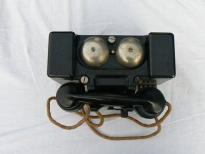 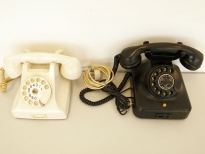 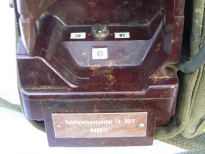 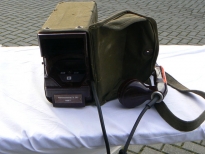 For a long time telephones were made of bakelite. In 1913 the nationalization of the telephone network in the Netherlands began. The Administration of Post and Telegraph, renamed in 1928 as the Governmental Bureau of Posts, Telegraph and Telephone (PTT), offered various devices. They were mainly made in the Netherlands but also of foreign manufacture. Nearly all units were made in black bakelite. Later manufacturers offered also white appliances, from urea-formaldehyde. Internally the devices were still very different and not interchangeable. It was not until 1965 that technical standardization was reached.

One of the pictures shows a wall phone made in 1955 by the Hengelo First Electrical and Mechanical Equipment Factory (Heemaf), who also produced locomotives. The oldest telephone has a crank to call the operator. This unit is of hard rubber, metal, hard rubber and bakelite, probably produced in Scandinavia in 1905.

Bakelite is a thermoset, meaning that it hardens permanently with high temperature and pressure. It does not dissolve in acids and solvents and is a poor conductor of electricity. For that reason the product was very suitable as insulating material for electrical equipment. Therefore the phenolic resin was of early interest to the electric industry. Especially because of the low production costs bakelite was until the 1950s the ultimate material for electrical installations such as fuse boxes, plugs and sockets.

There are some pictures of carbide lamps which burned the acetylene gas formed by the reaction of calcium carbide and water. The lamps were widely used in the mining industry and for bicycles and vehicles. They were later replaced by lamps using batteries. 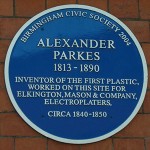